If you have ever had the chance to play some of the greatest puzzle games like Little Nightmares, Inside, portal, The Witness, and so many others, then you’re most likely a puzzle game junky now.

If you haven’t had the chance to play a great puzzle game, then this video could be a starting point for you.

Whether you are new to puzzle games or you play puzzle games all the time, this list features some really solid options that I think everyone can enjoy.

Now, I do want to say that a lot of these games on this list are puzzle platformers but that definitely does not take away from their puzzles.

So, with that being said, here is our list of the Best Free Puzzle Games on Steam

Frame of Mind places you in an environment that is constantly changing and defies a lot of what you think is the logical answer when solving puzzles.

Not only does the two-tone look to the game kind of trip you up when playing, but the game evolves in a way and it just offers such a unique gameplay style that I really can’t compare it to anything else.

The game is overall pretty short and offers just over 15 puzzles but in all honesty, the experience you get is very unique and if you like puzzle games or games that are not what you usually would expect, Frame of Mind is something I highly recommend. 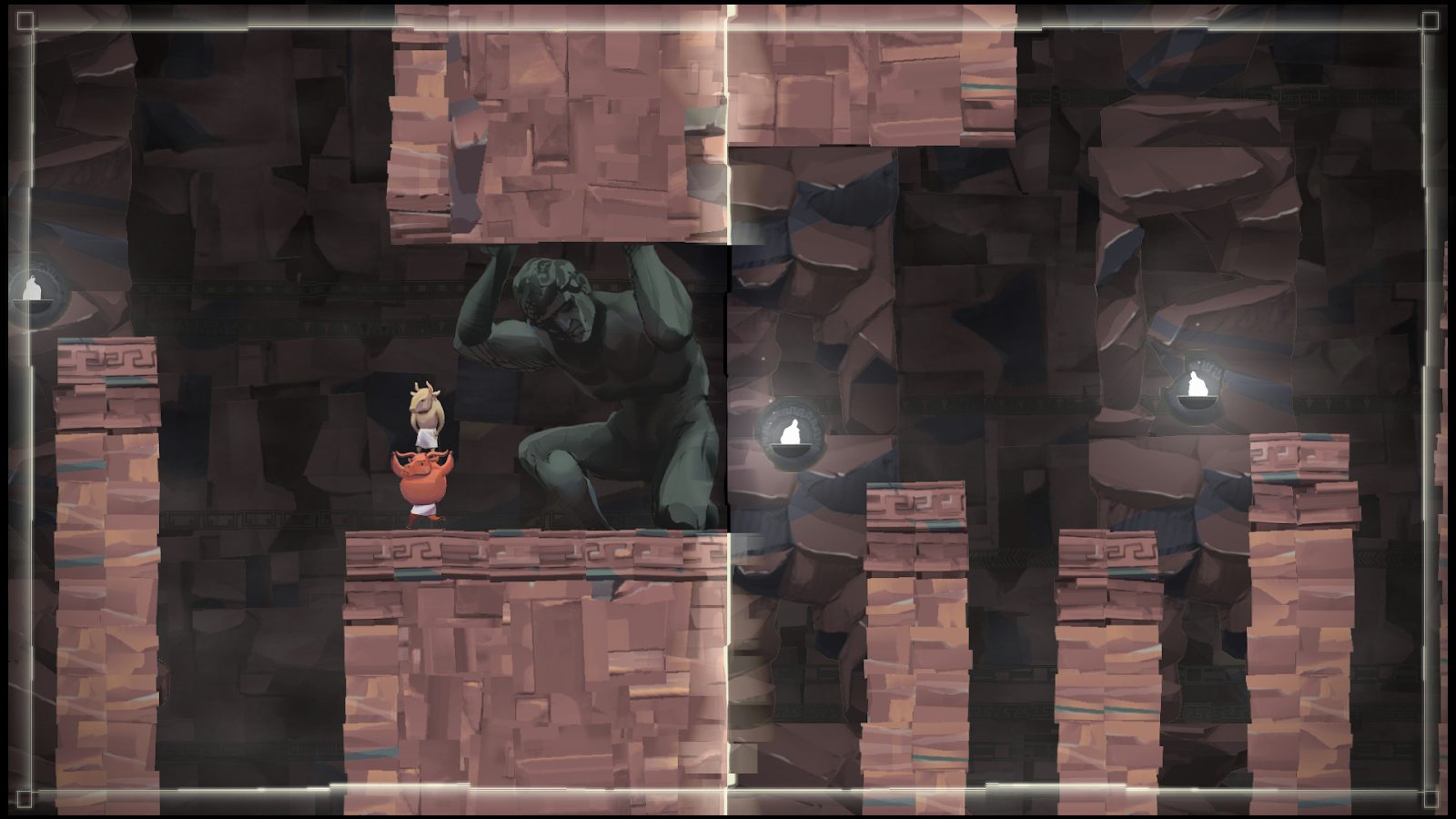 DYO has you playing as a minotaur trying to make your way out of a labyrinth and I wanna stress that the game is much more enjoyable and utilizes more unique gameplay aspects when playing with another person.

If you play it single-player or multiplayer you won’t be dealing with any enemies or time-based puzzles so the game is more of a relaxing type.

You have over 30 puzzles and depending on how fast you can complete these puzzles, you have anywhere from 2-5 hours of gameplay considering that it’s free and supports Co-op, DYO is a great option to look into.

Gravitas is a game that shows up a lot on our lists, and for good reason!

Gravitas takes inspiration from the Portal games but still holds its own and retains its own identity, without becoming a cheesy rip-off.

The game is actually one that I am extremely impressed by. You have characters that are really well developed and built out and decent puzzles too.

You don’t have a portal gun but you do have control over the pull of gravity in areas, so although you don’t teleport from one area to another like in Portal, you still have a transportation-centered puzzle game.

If you like the Portal games and single-player experience, Gravitas is basically like getting a paid game for free.

Perspective has one of the coolest puzzle mechanics that I have been able to experience in both paid and free games.

Perspective implements a puzzle mechanic where you, as the player, need to navigate the puzzles through both 2D and 3D changing perspectives.

The way it works is that you change your perspective in a 3D space by adapting the way you view your character and then once you set that in place, you need to solve the puzzle by moving your character on a 2D plane.

I love the art style of the game and the way the puzzle works out is super interesting and really takes advantage of the whole 2D slash 3D mechanic.

The game offers generally a few hours of gameplay and if for anything else, I recommend trying the game out just to experience the perspective-changing mechanic.

Toki Time Trial is one of the shortest games on this list but the way the game is, it offers a neat little experience that is definitely worth your time.

The game throws you into a timed puzzle and you have the ability to manipulate time to help you get through the puzzle.

Although the game is pretty short, you have a bit of replayability here because of the nature of the game mechanics.

Because it’s timed-based, you can go back in and try to get a better time than you did before.

The game has a unique feel and looks to it and although it is short, there are multiple ways of going about the puzzles and it really allows you to explore your options and take advantage of the time-changing mechanics.

Toki Time Trial is a short little gem that I highly recommend checking out.

The Pilgrim is a weird and strange experience but it’s a puzzle game that I wouldn’t overlook because it’s definitely a puzzle game worth playing.

The Pilgrim is a game that gives me Little Nightmares or Inside vibes because it has this odd atmosphere and world-building that is creepy and strange but really intriguing at the same time.

The game has you exploring a unique world trying to figure out what’s going on and basically solving what the game is all about.

The game takes about an hour to finish and the puzzles are generally pretty simple and easy I can see most people not having any issues with them, but regardless, I seriously think Pilgrim is an incredible puzzle game and I honestly wish it was longer.

Lab Rags is another unique puzzle game that utilizes this type of spawning gun to help you maneuver throughout the map and avoid dying.

The game has a 1920’s or 1950’s type vibe to it and it has this charming personality to it that almost makes it to where you don’t really take the game seriously, and that isn’t a bad thing.

The gun that you have lets you spawn in these rag dolls and those rag dolls let you get through areas by jumping on them or using them as step stools.

I actually really like this game and I had a lot of fun playing it. It has about an hour or two of gameplay, so you aren’t getting much, but I found it to be a lot of fun and I think it’s worth checking out.

Lightmatter has actually been mentioned on our website before but I have no issues featuring it again because of how much fun this game is.

In the game, you can actually die by shadows so you need to find a way to not only solve the puzzles on the map but also always keep in mind that you need to avoid the darkness from killing you.

The game is a puzzle platformer and features a type of light beam gun that you use to get you through the puzzles but also these color beam puzzles that I actually really enjoyed.

The feeling that the shadows give you really made the game a lot of fun because you always have to remember that you can’t be in the dark or you’ll die. I really liked that element.

I’ve heard that this game is really similar to The Talos Principle, which I’ve never played but similar to this game, it has praise among puzzle game enthusiasts.

Lightmatter is definitely worth giving a try.

Ginkgo offers players a free puzzle horror game that has the amount of polish that honestly a $30 dollar game would have.

The game is a single-player horror game that is inspired by Asian horror. You not only need to solve the puzzles around the map and sew the world together with your magic needle and thread but you get chased by some pretty terrifying monsters too.

The style and graphics in the game are honestly so good and as I said before, this kind of polish is literally what you would see in a paid game.

Unfortunately, the game is about 30 minutes long and so that kind of cuts things short, but I will say that even though the game is short, it’s worth the experience.

Shepherd of Light is one of the best puzzle games out there, free or otherwise.

The game has you playing a shepherd that is out to find his sheep. As you find them you are also being followed and chased by wolves.

The art style is really tasteful and the game has this unique color palette to it that I can really only describe as relaxing.

The game has about an hour or so of gameplay and the puzzles mostly have you trying to figure out ways to get your sheep to an area, but I like what they do with the staff and some of the maneuvering mechanics in the game.

Overall a really solid game and a great way to end the list off.